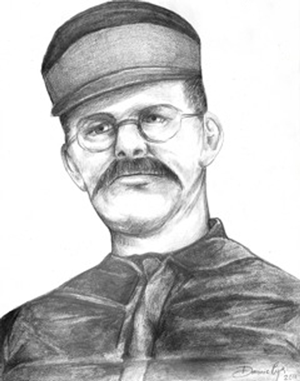 On September 6th, 1892 while attempting to arrest an armed drifter, Special Constable John Davey was shot in the chest at point blank range. John Davey was on foot patrol at the Grand Trunk Railway yards in Cornwall, Ontario. The Circus was in town. Also in town was a former resident turned highwayman James Slavin, who was out to extract revenge on anyone who got in his way; shortly before noon he found a few willing combatants in two local toughs, John "Black Diamond" Roach and Antoine Lafess. Two shots rang out, Roach and Lafess were wounded, the crowd screamed and Constable Davey, along with a Good Samaritan Louis Lafave ran to investigate. Davey intercepted the fleeing shooter knocking him down. Lafave grabbed the drifter from behind and was shot in the shoulder. As Constable John Davey pounced to control the shooter, he was fatally shot dying within seconds.

John Robert Davey was born in Cornwall on April 27th of 1845. He was the son of Barnard and Catherine and had 8 siblings. He was a Captain in the 59th Stormont Dundas Militia Unit and a Major in the Militia Band. John owned and operated his own Leather and Harness shop across the road from the police station. He was 47 years of age, married with three children Charles, James and Frank. He had been sworn in as a Constable with the Cornwall Police in August of 1892.

The Cornwall Police Service honoured the service of our fallen comrade, John Robert Davey and held several events to help the family and our officers Honour this valiant Constable who gave his life on his very first day as a member of our Service.