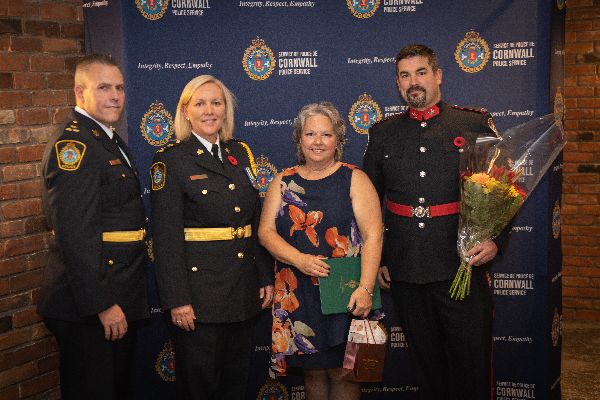 The event returned to an in-person event for the first time since 2019, featuring a tribute to retirees of the service, as well as honouring members for their years of service with presentations of Police Exemplary Medals and Long Service Awards. Awards of Excellence, including awards for Team Achievement, Excellence in Investigation, Preservation of Life, Innovation and Dedication were presented by the Cornwall Police Services Board. Approximately 60 employees were awarded at the event.

Some highlights of the event included the presentation of the CPA Community Hero Award, where recipient, Mr. Alexander Dovas was awarded for his quick instincts and courage during a robbery with firearms at his place of work on May 24th, 2022. The man stayed calm, ensuring the safety of other employees, and ultimately assisted police in locating the suspects by placing a GPS tracking phone in among the stolen items taken by the culprits from the business. Mr. Dovas received a standing ovation from the room of police personnel for his bravery and courage, during what was an obviously dangerous and distressing situation.

Also recognized by the CPA was Ms. Mylène Lacroix, receiving the CPA Award of Dedication for her continued effort to help others, both in her role as a Communications Dispatcher, as well as outside of the workplace. Mylène routinely serves other by knitting warm clothing and donating to the less fortunate. She has also worked abroad with mission trips to Uganda through her own initiative called “Project Under Things,” where she has collected hundreds of underwear, socks, clothing and funds to purchase much needed items for the children of Uganda.

Numerous members of the CPS were recipients of the Police Board Awards of Excellence, where stories of teamwork and investigative excellence were heard, specifically in several incidents involving firearms and a greater level of risk involved. Also awarded were incidents in which officers performed life-saving measures, as well as assisted individuals in crisis.

A Police Board Award of Excellence for Dedication was provided by Chief Spowart to the family of the late Ms. Carole Anne Levac, who sadly passed away on May 19th, 2022. Carole Anne proudly served as the Quality Assurance Manager for the CPS, having 20 years of service. Chief Spowart spoke of her passion for serving the community and her integral role as a member of the CPS.

The CPS would like to congratulate all recipients on their incredible achievements and continued dedication to serving the City of Cornwall.

The full list of recipients from the ceremony are as follows: