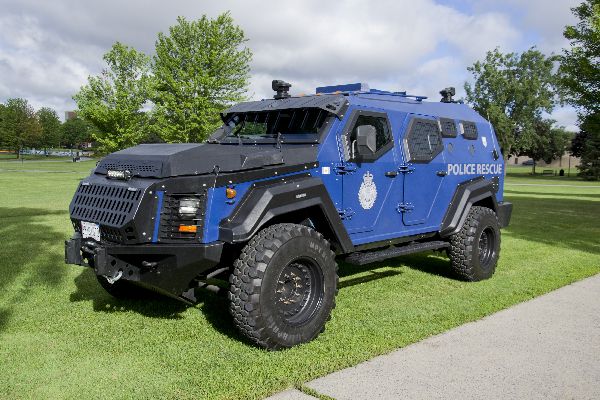 Cornwall, ON – The Cornwall Police Service (CPS) has purchased a new Armoured Rescue Vehicle (ARV) to enhance officer and public safety. The vehicle will provide members of the Cornwall Emergency Response Team (CERT) greater capacity to handle high-risk situations that would require an elevated level of protection.

The CPS had previously received a loaned 1996 VIP Armoured Vehicle from the Royal Canadian Mounted Police, which has come to the end of its lifespan and is in need of extensive and costly repairs.

The CPS has purchased a demo-model ARV from Zodiac Engineering at a cost of $95,000.00 before taxes. After comparing a variety of options, it was recognized that there would be significant savings as a result of it being a demo-model, with brand new ARV’s being sold at costs exceeding $400,000.00. Despite being a demo, the vehicle joins the CPS fleet having never been deployed in any police operations.

The funds to purchase the ARV were taken from the existing 2022 CPS Fleet Budget, after learning that no new standard police vehicles were available for purchase due to supply chain delays. This created an opportunity to realign funds already contained in the 2022 Fleet Budget, and put them towards the purchase of the ARV; therefore, not incurring any additional costs to taxpayers.

Once deployed this fall, the ARV will be used by CERT in situations involving injured person rescue, citizen evacuation, negotiations, barricaded persons and when responding to high-risk warrants involving firearms and weapons. The ARV offers the necessary ballistic coverage to protect the occupants of the vehicle and is solely used for rescue purposes, without having any offensive capabilities. The vehicle will only be used in high-risk incidents and for police training purposes. It will not be used for random or routine patrol calls for service.

“The ARV will provide officers and members of the public with an elevated level of safety,” said Officer in Charge of Infrastructure Services, George Knezevic. “With a changing climate in policing and public safety, officers need to be prepared for every possible scenario and require the necessary protection to keep themselves and others safe during rescue operations.”

In 2021, police responded to 49 incidents involving weapons, which is up 6.5% from the previous year. So far in 2022, CERT has been deployed in two situations involving firearms where the ARV would be instrumental in evacuating citizens from an imminent threat in the area.

The vehicle is being officially presented to the Cornwall Police Services Board on September 1st, 2022 and will be deployed upon completion of officer training on use of the vehicle this fall.