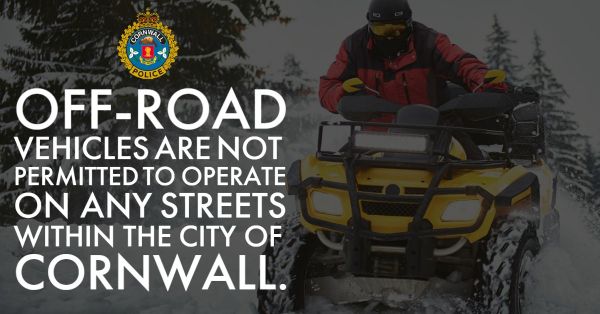 Cornwall, ON - During the month of January, the Cornwall Police Service (CPS) will be increasing its enforcement efforts surrounding the unlawful use of off-road vehicles. Police will be monitoring city streets and recreational areas, such as parks and bicycle paths, to enforce violations under the Highway Traffic Act.

The CPS has noted public complaints regarding off-road vehicles being driven aggressively on city roadways, creating hazards for other road users. There has also been noticeable damage to boulevards throughout the City of Cornwall as a result of off-road vehicle tires damaging the grass.

Residents of Cornwall will note increased police patrols and traffic-stop programs at known areas where off-road vehicles have been reported to travel.

Enhancing traffic safety is a major objective within the CPS Strategic Plan. As such, monthly safety initiatives have been developed to keep the public informed and promote safer roadways and bike paths. These initiatives will be carried out by the Traffic Unit, as well as Community Patrol Officers.

For more information on the use of off-road vehicles and motorized snow vehicles, please view the following links: